Tips on How To Play Video Poker and Win Big

Poker is one of the most loved card games and those who have mastered it are as respected in the gambling world as world-class soccer players are on the pitch. Its rules are simple enough to comprehend but the game is difficult to perfect, both online and offline.

The foundation of poker

Each player in offline poker is dealt a certain number of cards, depending on which variation is being played. In draw poker five cards are used by each person, while in stud poker seven cards are dealt, some of which are placed face-up on the table. Before cards are dished out, however, at least one player must put some amount of money into the pot – a step known as a forced bet.

Each player places a bet based on the value of their hand – whether or not their cards outrank those of their rivals. After this, each one must do one of three things: match (or call) the previous bet, fold (therefore losing the money), or raise the bet. The game finishes when each player has matched the last bet or has folded – if all but one has folded the winner doesn’t need to display their hand. If more than one player is left, they must display their cards in order to judge which hand ranks higher. There are many variations of poker, however, each with its own eccentricities.

Video poker can be played either in a casino or online. When playing video poker at a casino a patron uses a terminal similar to a slot machine to deposit money or credit, before hitting the “deal” button and being dealt a virtual 5 cards – five-card draw is the basis of almost all video poker variations. Next, the player can exchange one of more of their cards and draw the same number of new ones with the goal of improving their hand.

Even before placing a bet, a player should check the paytable to see how much money they might win for various card combinations. The prize depends both on how high the cards rank and how much the player places as a bet. 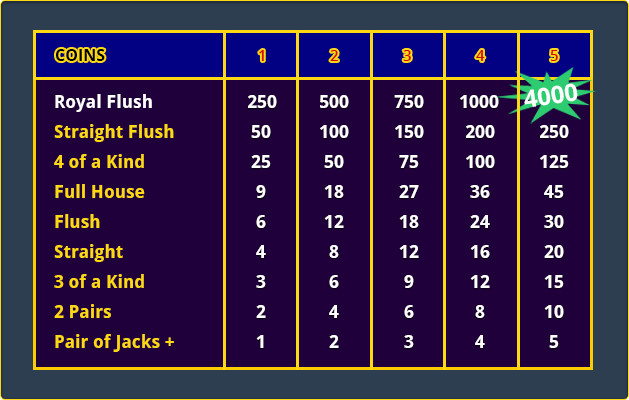 In video poker different card combinations are more valuable than others; exactly the same as traditional poker. A royal flush is worth more than four of a kind, a flush is better than three of a kind and so on. After making the decision of how many cards to keep and exchange, a player pushes the “deal” button (sometimes “draw”) and the machine will display its final hand – five new cards from the deck after the player’s exchanged cards are discarded. There are many variations of video poker, just as with all casino games.

Playing against the machine

Playing poker is usually dependent on some degree of luck as addition to a player’s skill. Playing video poker, however, can be an even bigger gamble, as the machine can calculate odds and possible outcomes within split seconds. Despite this, a skilled player can sometimes outwit this most formidable opponent.