An Introduction to Kaleidoscope Film 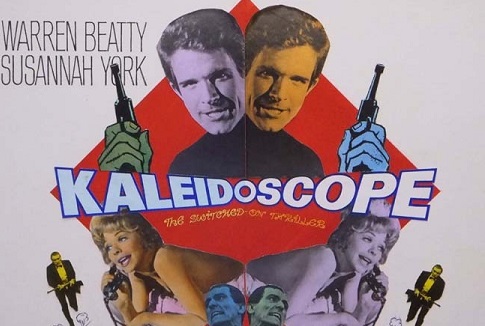 Kaleidoscope is a British crime film that first premiered on the 8th of September 1966 at the Warner Theatre in London. The film stars Warren Beatty and Susannah York and was directed by Jack Smight.

Kaleidoscope tells the tale of Barney Lincoln, who breaks into a playing card manufacturer in Geneva in order to mark the cards and subsequently break the bank at every major casino in Europe.

He left his romantic love interest, Angel McGinnis, in London during his trip to Geneva, but meets up with her in Monte Carlo, where he wins enormous amounts of money. However, Angel is suspicious about his leaving England and talks to her father, who is a detective from Scotland Yard. He forces Barney to help him catch Harry Dominion, a smuggler with a love for gambling.

A kaleidoscope is a toy, much like a telescope, that you look into, which then reveals coloured objects falling into various symmetrical patterns as the kaleidoscope is rotated. Like the toy, the film Kaleidoscope is also a succession of colourful images with pretty designs.

The film has been critiqued of having lots of pretty images with little substance, much like the actual kaleidoscope. The film’s protagonists go on a trip of adventures that are rather implausible, but deliberate made to be such. For example, the whole premise of marking all playing cards used throughout Europe is an implausible goal.

The characters, too, are beautiful images without much substance. Mr Barney Lincoln is a cool and casual gentleman but also a cheating gambler, Miss Angel McGinnis is a fabulous fashion designer with complete airiness. This is what the characters are meant to be, but their portrayal and personality characteristics fall flat. The comedic balance between the young couple and the villainous antagonists falls flat, and the beauty of the kaleidoscope is lost.

But while the actions and activities of the film fall flat, the indoor and outdoor sets are beautiful and colourful, staying true to the images of the kaleidoscope.

Despite this failed film, Warren Beatty has moved on to become a highly acclaimed actor and filmmaker. He has been nominated for a total of fourteen Academy Awards, four for Best Actor, four for Best Picture, two for Best Director, three for best Original Screenplay, and one for best Adapted Screenplay. He won the Oscar for Best Director for Reds in 1981. He is the first and only person to have been twice nominated for acting in, directing, writing, and producing one film, first with Heaven Can Wait in 1978, and again with Reds in 1981. Beatty was also awarded with the Irving G. Thalberg Award by the Academy in 1999.

Even though Beatty’s portrayal in Kaleidoscope in 1966 fell flat, his portrayal of Clyde in the 1967 Bonnie and Clyde was enormously well-applauded, and the film remains an all-time beloved classic.