The House of Games Film 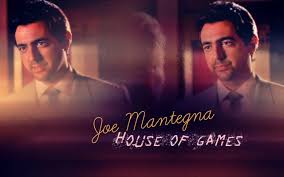 House of Games is the 1987 directorial debut by David Mamet, now an acclaimed director. Mamet also wrote the screenplay, which was based on a story he had originally written together with Jonathan Katz. The film starred Lindsay Crouse, Joe Mantegna, Ricky Jay, and J. T. Walsh.

The House of Games Plot

House of Games centres around a psychiatrist, Margaret Ford, played by Lindsay Crouse, who has achieved immense amounts of success with a recently published book, but still feels empty and unfulfilled. During one of her meetings with a patient, Billy Hahn, played by Steven Goldstein, he informs her that his life is in danger, and she agrees to help him, despite the obvious danger of the situation.

Margaret manages to confront the criminal Billy is indebted to, named Mike, who agrees to forgive Billy’s debt as long as Margaret joins him in a back-room poker game and agrees to find out when one of the other players, George, is bluffing. She figures out that he bluffs when he plays with his ring. However, Mike still loses the round and George demands that Mike pay US $6 000. When he is unable to do so and George pulls a gun on Mike, Margaret intervenes and offers to write a cheque. She then notices that the gun is actually a water pistol and that the whole game was a set-up to con her out of her money. She is excited by this, and decides to return the next night to ask Mike to teach her about cons so she can write a book about it.

So begins a series of cons and Mike and Margaret become romantically involved. However, it is with a heavy heart that Margaret learns that Mike was playing against her all along, and conned her out of US $80 000. Not willing to stand down, Margaret comes up with a con plan of her own, but her plan is uncovered and Mike informs her that he cannot pay back her money as it has already been divided. She pulls a gun on him and forces him to beg for his life, but he erroneously thinks she is bluffing. She shoots him in the leg, and he curses her. She shoots him three more times, killing him.

At the end, Margaret is shown returning from vacation with no remorse of having killed Mike and still deeply involved in the con world to experience brief thrills.

House of Games received a positive reception, and even received four stars and much praise by acclaimed film critic, Roger Ebert. Further critics all describe the film as awake, devious and comedic, and fresh. The film was rated ninety-six percent on Rotten Tomatoes.