Despite its name, the Cherry Mischief digital slots game does not feature classic fruit machine icons. Developers High 5 Games have instead opted for a fairy theme, and the game is named after the queen of these fairies, Cherry Mischief. It’s a three line, five reel game backed by ethereal music, with the woodland background and the reel symbols designed in realistic detail and intricate colours.

There are eight different betting levels available on all 40 bet lines, and unlike many other slots variants, players do not have to play all 40 lines on every spin if they do not want to. So the total staked on each spin is adjustable, according to the size of the player’s bankroll. Options range from just 0.01 coins per line per spin, to 10 coins per line. So the maximum bet available to high rollers is 400 coins per spin. Five wilds on a bet line, the highest-paying win in the game, will pay out 1,000X the line bet; in other words, a maximum of 10,000 coins. 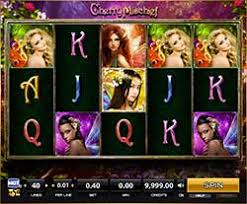 Cherry Mischief employs the standard poker symbols 10, J, Q, K, and A as its low-value icons, each one rendered in an ornate font. The minimum required for a win is three matching icons in unbroken succession from the left-most reel, and the lowest scoring possibility, three 10s, scores even money on the line bet. Wins increase by one coin for each step up the scale. For example, a run of three Js wins 2X the bet, three Qs 3X, three Ks 4X, three As 5X, four 10s 6X, and so on. Five As, the highest combination in these symbols, therefore wins 15X the line bet.

Larger wins are reserved for the fairy icons. There are four of them; all crafted in lifelike detail, including the queen of the fairies herself, Cherry Mischief. Two Cherry Mischief icons in a winning combo score 4X the line bets, but the other fairy icons require a minimum match of three symbols to win. Prizes range from 7X the line bet (three identical fairies in a row) to 50X the line bet (five Cherry Mischief icons). The Super Stacks Feature can increase wins. This is triggered at random during the game, and results in symbols being stacked to fill an entire reel, thus increasing the winning combinations possible.

Wilds and the Capture Bonus

The Cherry Mischief wild symbol is the Cherry Mischief logo, and it can substitute for any other symbol while multiplying any wins on that bet line. Wilds can also be stacked, which increases the number of winning combinations on a spin dramatically. Payouts on wilds can rise to as much as 1,000 the original stake (paid for five wilds on one bet line). The Capture Bonus is another feature that multiplies wins: if a fairy is “captured” in the centre spot on reel 3, a multiplier determined by that specific fairy increases wins. Capturing Cherry Mischief will multiply the winning total by 13. Online and mobile versions of the game are available, so it can be played on desktop, tablet or smart phone.