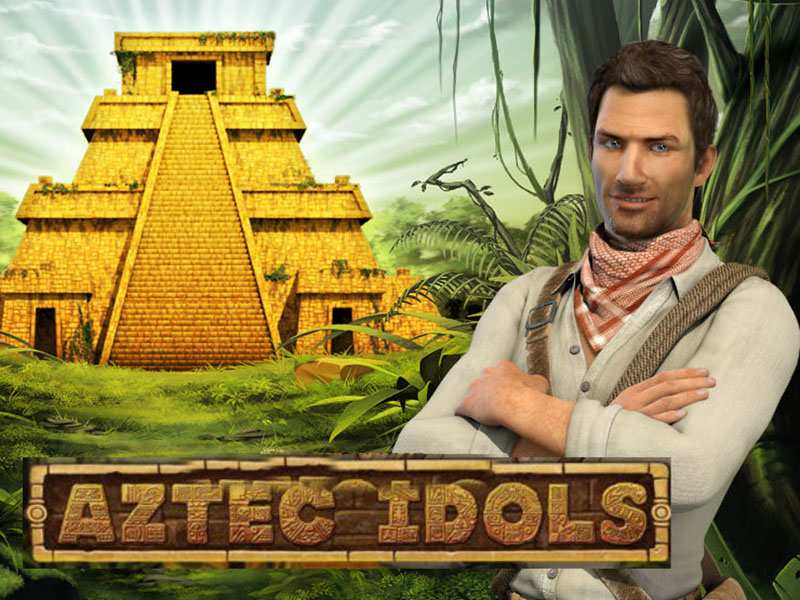 The unabridged title of this online video slots game is actually ‘Rich Wilde and the Aztec Idols’. Produced by Play N Go, the smooth introductory video indicates and gives an idea of the quality of the game to follow. As an Aztec-themed slots game, this slot machine has two separate features, and high quality visual graphics with advanced game sounds.

Based on the adventures of an Indiana Jones-type character, Rich Wilde, Aztec Idols is set in a world of hanging vines, mysterious tombs and hidden relics. The game sounds are excellent, even including ambient jungle noises between spins that contribute to the game atmosphere.

The symbols on this 5-reel, 15 payline slots game consist of different face-masks, mixed with card symbols that are stylised carvings. The unshaven relic-hunter character, ‘Rich Wilde’ is the wild symbol, as would be expected. There are a variety of animations on the reels, such as the sparking of the golden temple or rotation of the ancient calendar, but they do not distract from the game itself. Sounds are a mix of drums, pipes and upbeat tones that are activated when a winning combination is achieved. In between are the ambient jungle noises, the crickets chirping and background jungle sounds.

There are two notable features in this game; a break-out ‘pick-em’ round, where golden statues are selected from within the temple and a free spins round, which introduces a new scatter into the game.

Setup and Play of Aztec Idols

In terms of setup and play of Aztec Idols, there are 15 possible winning lines on this game. In addition to the lines and coin size, possible variable options include the number of coins per line to play, the coin denomination and the gamble feature after each win, where winnings can be doubled based upon the wager on the suit of a face-down card.

Rich Wilde, as the wild symbol, substitutes for everything except the scatters and bonus symbols. Five of these adventurers on a win-line pays 5000 coins, with 1000 for just 4. The masks come next, with gold paying 1000 coins for 5, grey pays 750, green 500, and the bear-mask also paying 500. These are decent win amounts. Playing cards ace down to 10 make up the rest of the winning symbols.

The scatter symbols are the rotating Aztec Calendar. Three of these triggers free spins, as well as winning 5x the total spin amount. The final symbol is the golden temple, and three of these will trigger the pick-em round inside the temple itself.

Activating the temple pick-em game could pay up to 150x the total bet. During this feature game, players find a graphic sequence when they enter the top of the Aztec temple. The selection of one of the golden statues reveals either a monetary prize or green gas, signifying the end of the feature. Statues are selected accumulatively until the green gas appears. Free spins can be triggered by hitting three calendar symbols.

The two separate bonus features are interesting, although the more lucrative is certainly the free spins feature. It is primarily here that players will feel the high payout rate of Aztec Idols, which is 96.65%.