Leander software are known for creating hybrid games where online slots meet various other casino games. Reely Bingo slot is, as the name suggests, a mix of an online slot game and bingo. The basis of the game is much like any other slot game where the aim is to land three or more consecutive matching symbols on a pay line but the symbols on this online slot game are various numbered bingo balls. It is during the bonus game that the bingo element comes in.

Reely Bingo is a five reel online slot game that works slightly different. In this slot, the reels don’t spin in the usual style but rather the bingo balls drop into position. The bingo ball symbols run from ball numbers two to twelve and the bigger pay outs are rewarded for the lower numbered ball symbols.

The biggest Reely Bingo slot jackpot prize is however paid out for landing five of the blue wild symbols in a row. These symbols also assist in forming winning combinations by acting as replacements for any of the other symbols except the scatters and bonus symbols.

The online slot game has adjustable settings like the mute button which turns off the jazzy tunes if desired and the auto play feature which spins the reels up to 500 times automatically. 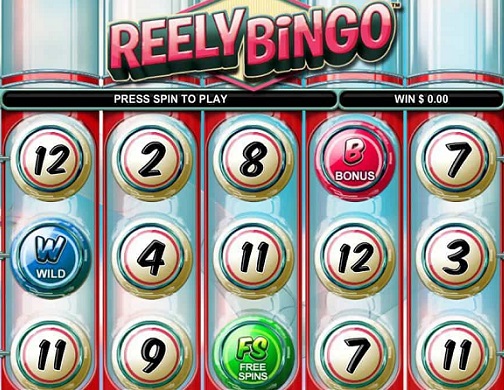 The Slot Bingo Side Bet Feature

Reely Bingo slot has a slot bingo side bet feature which is only playable if the maximum number of pay lines are activated and the coin value is not adjustable during these spins. The feature lasts for five consecutive spins after which it is switched off.  This feature consists of a bingo card containing five numbers. After every one of the five spins the number that is in the centre most position on the reels will be crossed off the bingo card. Once the five spins are up the bingo card will be evaluated to any wins.

The second bonus game in the Reely Bingo slot game is the video bingo madness feature. This bonus game is triggered by landing the red bonus symbols on reels two, three and four. When this happens a screen displaying four bingo cards will appear. Each card has fifteen numbers and a series of bingo balls will appear at the bottom of the screen while matching numbers on the cards are crossed off. Any bingo ball below ten will be held in the extra ball slot above the cards and the value of the ball will the amount of extra bingo balls awarded. Wins here are calculated according to the amount of crossed off numbers and their positions on the card.