Millennials, and even those born towards the end of the Baby Boom era, may not remember James Dean, but in his day he was the ultimate tragic heart throb. After racing to stardom in only three highly acclaimed movies, he was the undisputed heart throb of the mid-1950s. Shrugging off the conservatism of the time, he lived a fast, exciting star’s life, before dying way too soon in a car crash, in his beloved Porsche Spyder.

The James Dean slot title from NextGen pays tribute to this magnetic actor, whose broody contrariness and rebellious energy perfectly fitted the youth revolution that first stirred in the 50s, and turned the films Giant, East Of Eden and Rebel Without A Cause into instant classics. The slot has five reels, and a total of 25 pay lines.

The James Dean slot uses five poker symbols: 10, J, Q, K and A. They are presented as the numbers in the flashing countdown that used to start off old-fashioned movies, and prizes range from 5 coins for three 10s on a pay line, starting on Reel 1 and continuing in unbroken sequence, up to 200 coins for five As or Ks on one pay line. Like the A and K, the Q and J also win identical prizes for the same matches.

The other four ordinary icons relate to James Dean or his career. A roll of film and Dean’s iconic aviator shades score identical prizes of 20, 40 or 500 coins, whereas Dean’s motorcycle and Porsche begin winning prizes for just two matches or better. The prizes for the motorcycle are 2, 50, 100 or 2,000 coins, while the Porsche wins 5, 100, 200 or 5,000 coins. 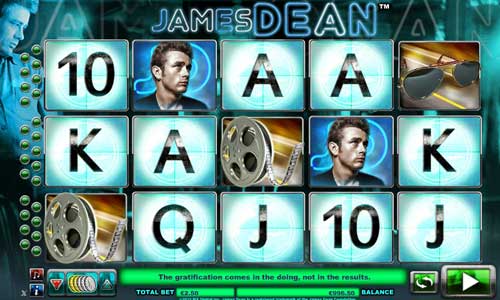 The Wild is the first icon to use a picture of James Dean himself, against a blue neon sign. It appears only on Reels 2, 3, or 4, and substitutes for any other symbol except the three special icons. If three Wilds come up over the three centre reels, it triggers an immediate 3 free re-spins, with all prizes tripled and all three of the centre reels covered by expanded Wild reels throughout the re-spins.

The James Dean slot has three more special icons. His Hollywood Walk of Fame star is the Scatter, paying between 2X and 250X the total bet for three or more appearances anywhere on the reels. Another James Dean photo, with a purple background, activates the James Dean Pick Bonus when it appears three or more times. This can win the player up to 150X the total bet in normal play and 300X the bet in free spins rounds.

The final bonus icon, a clapperboard, activates the Legend Spins. These are free spins rounds in which all prizes are multiplied by X5, and the James Dean Pick Bonus can be worth 750X the total bet. With Wilds, Free Spins and extra Bonus triggers, the James Dean slot can deliver some impressive prizes at https://onlinenzcasino.co.nz/nzd/ casino.